Networking for Peace in Southern Caucasus 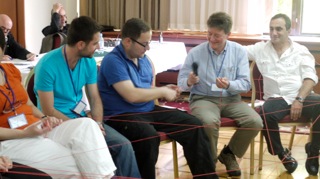 Thirteen organisations working on peace building gathered together in Yerevan, Armenia between 4-6 May 2012 at the invitation of the German organisation EED to get to know each other and strengthen networking. I had been asked by the hosts, YMCA Europe, to co-facilitate the workshop. It was very interesting to compare the different approaches each organisation used for peace-building using a conceptual framework called the Reflection on Peace Process matrix. Equally interesting for me were the participants’ different views on networking. For some people, networking requires setting up regular, face-to-face meetings with an agreed leader and a focus on devising collaborative projects. This is a formal and potentially resource-hungry approach to networking. For others, networking is more informal – for example, using Facebook to sustain relationships and Dropbox to share documents. It is tempting to see these different approaches in generational terms with younger practitioners being more likely to value virtual networking but this would be an oversimplification. A key factor in making sense of these two views about networking is understanding the value that individuals place on the knowledge held by their peers. Those that place a high value on peer knowledge seem more likely to adopt technologies that help them to identify and share that knowledge. For those wishing to develop this approach to networking, the first priority may be to stimulate a ‘can-do’ attitude that values knowledge, rather than the more conventional approach of mobilising resources. As one workshop participant put it, “networking requires individuals taking initiative”. Another identified the importance of “well-defined and shared problems to focus on”. Some might question that exclusive focus on problems, but combining individual resourcefulness with mutual learning focused on shared questions is, in my view, a powerful recipe for developing networks.