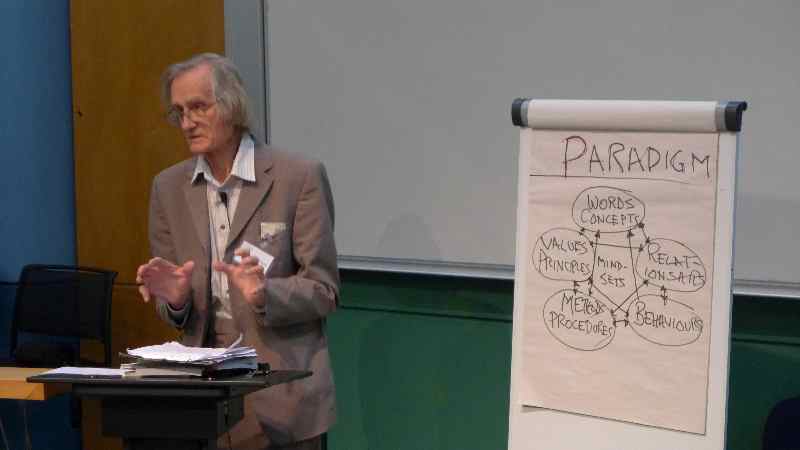 At 83 years old you’d think Robert Chambers might be taking it easy. But he was the key speaker at the re-launch of the Humanitarian Centre in Cambridge – now to be known as The Centre for Global Equality – and he’s still practicing what he preaches: participation. Addressing the packed benches of the Judge Business School’s lecture theatre he started by asking us who we were: hand-up the students (lots), academics (lots), business (quite a few – including event sponsors), NGOs (quite a few). He didn’t ask about consultants, so my colleague Orla and I didn’t get a chance to put our hands up then, but we made up for it later. His theme was on challenging the paradigm of standardised, linear and planned change processes (he called these neo-Newtonian practices) in favour of rebalancing the emphasis towards ‘Adaptive pluralism’. He argued that change is about people, and that

approaches that include ideas about emergence, unpredicatbility, inventiveness, surprises and reciprocal and personal relationships have “…a stronger practical and theoretical base, and wider applications, than has generally been recognised or accepted.” (IDS Working Paper 344). Not put off by the eminent people in the room Prof. Chambers carried on putting participation into practice by asking the audience questions and betting against us guessing the answer. Orla won £5 from him for guessing that listening was the most important skill that communities wanted from development workers and I won £2 for guessing the word beginning with ‘R’ which is a key element of development practice which is often forgotten (answer below!)

I’d brought along my copy of his book Participatory Workshops: a sourceboook of 21 sets of ideas and activities, which I turn to over and over again for inspiration, and which also sets me off into fits of laughter. Years ago I’d emailed Prof. Chambers to complain that his book had kept my son awake one night as I kept laughing out loud. So when I asked him to autograph the book he said “Oh it’s YOU! I’ve dined out on your story many times!”.   He’s influenced me in so many ways – so it’s good to know that I’ve made my mark too.